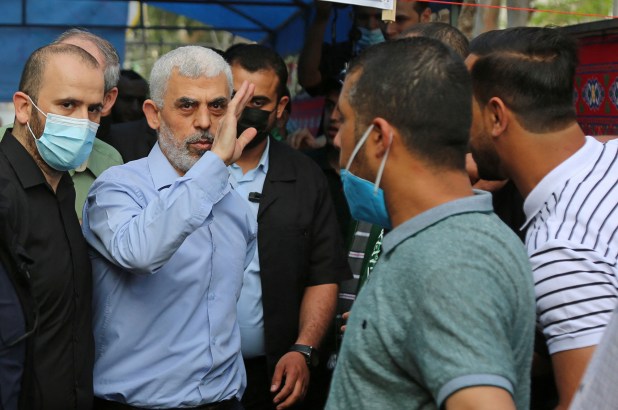 Hamas chief Yahya Sinwar (left in blue outfit) arrives in Gaza City to pay condolences to commander Bassem Issa, who was killed by Israeli air strikes, on May 22, 202.

Hamas chief Yahya Sinwar made his first public appearance since the cease-fire, visiting the home of a commander killed in an Israeli strike.

Sinwar, whose home was targeted in a bombing raid, visited a tent where family members were mourning Al Qassam leader Bassem Issa.

Israeli Defense Minister Benny Gantz, in an interview with Israeli media Saturday, said Sinwar and Hamas chief of staff Mohammed Deif are both still targets. Meanwhile, humanitarian aid began flowing from Israel to Gaza Saturday morning, with convoys of trucks from Egypt and Israel carrying fuel, food and medicine to the battered region after 11 days of rocket and missile fire.

Gaza officials say at least 240 people were killed by Israeli airstrikes. Twelve people died in Israel from more than 4,000 rockets fired by Hamas militants, Israeli officials said. Diplomatic efforts to broker a lasting peace between Israel and Hamas continued Saturday as both sides honored the cease-fire, and US Secretary of State Antony Blinken is now expected to arrive in the region Wednesday to try to build on the truce.

Knicks' Obi Toppin may get a demotion in 2021 NBA playoffs

Ilya Sorokin wows for Islanders in place of Semyon Varlamov

Tech Shakes Up the Supermarket

Let’s just say that Ryan Pulock’s win-saving play as the clock expired in the Islanders’ 3-2...